There’s quite rightly been a lot of talk about the Raspberry Pi, and quite some discussion on what it’s good for.      Whether it will  succeed in it’s mission to create a new army of programmers is any one’s guess at this point, but for me it’s already succeeding.  No, not for programming but for teaching computer administration.   I’ve got a small cluster of  Pi (three, 2 borrowed at the moment) and I’ve been having a lot of fun configuring apache Cassandra on  them.    So for   less than £100 I’ve got a Linux cluster I can blow away at any moment and start again.    I can reconfigure the Cassandra settings, start the cluster again and run stress tests on the thing. 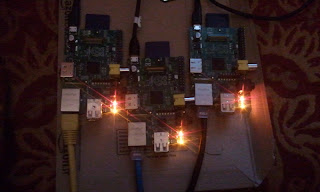 I take backups of the SD cards once in a while so I can go back to previous configs at any point  which is quite easy.    On a Mac (or Linux) just  put the card in a card reader and use the following command:

where rdisk1 is the USB port you will have identified when creating your first image and disk.img is the file you want to create.

As a teacher,  having cheap hardware around like this is going to allow  us to give students machines to  play on, to set up, muck around with little or no chance of damage.  Our undergraduate networking course is  going to get a whole lot more hands on !  Sure you could do it with VMs  but that just won’t feel as real as plugging a cluster together.  Once we have our data Science MSc up and running (News here )  I’m hoping that we can give the students access to a 2 data center cluster of 20 to 30 machines, all for around 100.    Doing that with VMs is possible but a lot work (although you can of course automate it)  and would probably cost a  lot more to setup !

Looks like the Pi can do a lot more than teach programming.
Posted by Andy C at 10:38 AM